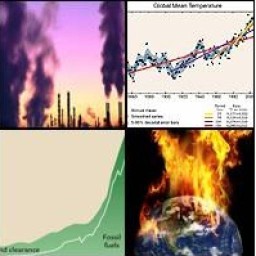 I am a meteorology professor at Suffolk County Community College and have been teaching for 22 years (four of those at Penn State University). The science is clear to me and to most experts in the various fields associated with climate science: Humans are causing most of the observed global warming in the past several decades and, if we continue emitting GHGs under a “business as usual” scenario, it will become increasingly difficult and costly to adapt to the changes that are likely to occur. As a parent of two small children, I do not wish to see them nor their children grow up in a world where billions of people may suffer due to the ignorance of those before them. After reading Chris Mooney and Sheril Kirshenbaum’s book Unscientific America it dawned on me that the message from the scientific experts was not reaching the masses. It has become a central mission in my life to bring the science from the journals into the hands of the general public. For this reason, I am working with Drs. John Abraham and Ray Weymann to lead the Climate Science Rapid Response Team. The CSRRT is a match-making service between top scientists and members of the media and office holders and their staffs from various levels of government. In case you are wondering: My salary is 100% from teaching duties and I have no climate-related grants. I am a registered Independent. I never voted for Al Gore.

[Scott, like me, is apparently doing this kind of work because he loves money so much he is willing to do without very much of it. -mt]

Two of the more dubious claims related to climate research funding are:

The first question can be answered by asking another question:

How many climate scientists are driving a Mercedes sports coupe or other $100,000+ car into a three car garage in a posh gated neighborhood?

Not convinced?  I will delve deeper into claim #1 later in this post and also in a future post (linked below).

The second question is easier to answer.  There are a few publishing scientists that strongly disagree with the established consensus that humans are the primary drivers of modern climate change and yet they seem to find funding without much difficulty.  These include, among others, Dr. Richard S. Lindzen (MIT), Dr. John R. Christy (UAH), Dr. Roy Spencer (UAH/NASA), and Dr. William M. Gray (CSU).  Wikipedia hosts a list of others and many of those scientists appear to be funded.

Fossil fuel companies such as ExxonMobil stand to lose revenue if carbon emissions are restricted so they certainly would dole out money to any scientist that was working on a landmark anti-AGW paper.  Over the years, ExxonMobil alone has kicked in millions and millions of dollars to deny the science.  Surely a company that showed a net profit of $45 billion in 2008 has a few dollars to spend on real anti-AGW research that has a much higher credibility rating than the anti-science information campaign that they have bankrolled since the mid-1990s.

Getting back to claim #1.  Are scientists getting rich from grant funding?  I will use myself as a case study in this post and, in Part II, I will write about others’ experiences.

I recall a lecture I gave on climate change back in April 2009.  After I was finished, a gentleman told me that he though the whole thing was a hoax so that we scientists could get rich from funding.  Before I even had a chance to reply, a voice from the crowd (my wife) yelled out, “Trust me, I can tell you, he isn’t making any money from this. Nada. Zip. Zilch. Nothing!”  The truth hurts, doesn’t it?

I am currently listed as a co-investigator (co-I) on a NASA grant proposal that is to be submitted this month.  The principal investigator (PI) is a colleague of mine who I will call Prof. X and the grant budget is requesting $437,232.67 over a three year period.  Funding from the proposal will be used to create a learning institute to educate secondary education teachers about climate change.  These teachers will be trained to use climate data from NASA in order to incorporate the latest climate change science and data into their curricula.  Essentially, NASA will be using some of its funds so that our children will become more informed.

Assuming the grant is approved, it would be easy for somebody doing a cursory scan of NASA grants to shout out that “Prof. X received a grant for $437,232.  He is getting rich from research funding!  No wonder he claims that humans are causing global warming.  He is in it for the money!”  Sound familiar?  It is often the case where a climate scientist receives a large grant and then there are cries of outrage from those that have no idea of how the money gets spent.

But, even that is very misleading.  At Suffolk County Community College (SCCC) and many other institutions, grant money can only REPLACE teaching load.  Grant money does not add to our salaries.  For me, $16,088.25 per year equates to 11.8 credit hours of overload teaching.  (Overload hours are those that go above the base salary of fifteen credit hours per semester.  I typically teach 20 overload hours per year which is four classes.)  Rounding to 12 hours, I will give up 2.5 classes per year in order to participate in this grant endeavor.

Bottom line: If the grant proposal is accepted, my W-2 will not change for year 2010.  Instead of all of my salary coming from SCCC, most will come from SCCC and some will come from NASA.

Unfortunately, the Mercedes will have to wait a little longer.

Via http://profmandia.wordpress.com with the kind permission of the author, Scott Mandia. Prof. Mandia retains all rights to this article.

Image from Flickr is Copyright by tao_zhyn released into Creative Commons Attribution 2.0 Generic (CC BY 2.0)