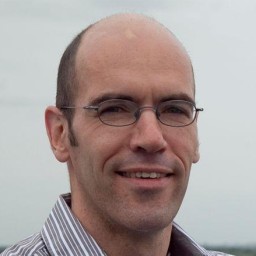 Bart Verheggen submits this item which has been languishing for a few months. It responds to some discussion of a while ago. (It was one of the few times I’ve ever disagreed with Ray Pierrehumbert.) But I’ve had some more thoughts along these lines which I’ll submit as a follow-up story, along with a modest proposal, so despite the burgeoning climate agenda we’ll revive this discussion… -mt

At the end of last year, a discussion ensued on several blogs (*) about the desirability of focusing on reducing other climate forcings besides CO2. A few reasons are usually put forward for shifting the focus temporarily to shortlived forcings such as ozone, black carbon, methane, etc (nicknamed the OTF -other things first- strategy):

Ad 1) Ozone and especially black carbon (soot) are serious health hazards. Therefore, reducing them is a win-win situation in terms of both climate and health.

Ad 2) Other warming agents (such as methane, soot, ozone) have a much shorter residence atmospheric lifetime than CO2. Thus, when their emission is reduced, their concentration will quickly decrease. Not so for CO2, the concentration of which remains elevated for a much longer time when presented with the same relative reduction in its emission. This means that temperature will decrease faster when the emission of shortlived compounds is decreased as compared to that of a longlived compound such as CO2. The other side of the coin is that for long term warming, the cumulative emissions of CO2 are dominant, even if in the short term changes in its emission are relatively ineffectual, even more so because they are often combined with emissions of cooling aerosols. (More on the timescale issues below)

Ad 3) This line of reasoning is mostly political in nature, based in large part on the lack of progress in International climate policy, e.g. through the UNFCCC process. Cancun actually provided a much needed confidence boost in this respect, even if there still is a ‘gigaton gap’ between the combined emission reduction pledges of the Cancun agreement and the officially accepted 2 degree target. Amongst climate concerned, the dominant feeling in this respect is one of ‘too little, too late, too slow’. It has e.g. Keith Kloor arguing that it’s time to try something else (as is e.g. the group behind the Hartwell paper), assuming/hoping that the shortlived forcings will be easier to tackle and be less severely opposed, about which people disagree.

The proposed strategy here is that, given the failure of CO2 reduction policy, efforts should be put into secondary areas in order to grow the necessary political support to make the main effort – CO2 reduction – a viable political option and eventual reality.

This rings a bit like wishful thinking to me, as I don’t see how reduction of secondary forcings will necessarily make CO2 reductions easier. It could go both ways: Showing that at least we’re doing something could increase the political will and mutual trust necessary to tackle the CO2-elephant in the room. OTOH, it could also backfire by lowering the political will to do “even more” if the temperature rise is reduced (and also for as long as it’s not reduced due to weather variability, which will make people feel powerless to do anything). Does short term success (in reducing global avg temp) help or hamper long term success (for which strong CO2 reductions are mandatory)? In the current political climate I’m not optimistic about that. Also note that “short term” in the above refers to a timescale of a decade or two, which would be additional time lost to start reducing CO2 emissions. To achieve the same temperature stabilization target, CO2 emissions would have to be reduced even stronger thereafter, which would make the whole effort much more expensive.

Buying time
Much has been made out of the somewhat muddy statement that reducing shortlived forcings would “buy time” to deal with CO2. It all depends on the timescale that you’re looking at: To reach the same short term temperature target one could make the argument that there’s less need to reduce CO2 if other forcings are tackled, so “time is bought” to go on with CO2 business as usual a little longer. Note that this (related to #2) is in contradiction to the fourth argument above, that success in other forcing helps tackling the CO2 forcing (rather than allows delaying it). I don’t buy #4 though. Also note that in the long term no time can be bought without tackling CO2 emissions.

Keith Kloor brought the question to the Climate Science Rapid Response Team, and received a reply from Dorothy Koch (NASA-GISS):

Warming “Soot” is co-emitted with shiny cooling aerosols, so one needs to be careful to target sources with lots of dark carbonaceous material but without the shiny aerosols (diesel is a good target). Finding methane sources that are easy to reduce is also not so easy. So the point is, once we find the low-hanging particular sources of the particular warming short-lived species, the [climate] benefit is small. But worth pursuing, particularly due to the co-benefits of pollution reduction for both soot and ozone.

since methane responds within a decade to emissions reductions, we still get the full climate benefit of reducing methane even if the actions are deferred to 2040. The same cannot be said for deferral of action on CO2 emissions. [because of the difference in atmospheric lifetime]

The cartoon graph at RC was criticized by Lucia for not including other politically relevant emission scenarios, and she drew one more in (black line). I tried to make the picture more complete by adding in a couple more (green and orange lines), leading to the following cartoon graph: 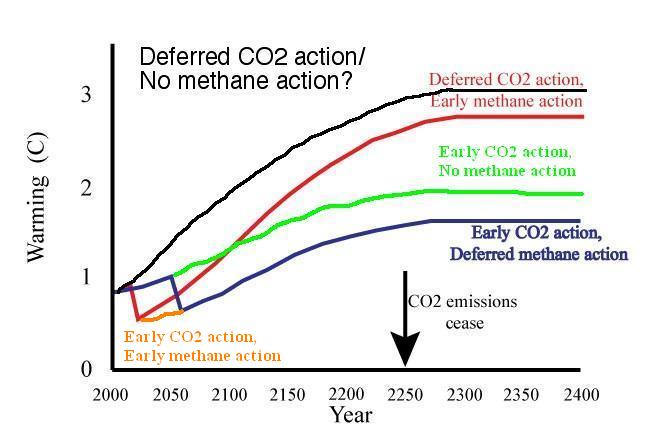 RayPierre compared the blue and red line, whereas Lucia argued that the politically realistic comparison would be between the red and the black lines. I think the take home message though is in the timescales of temperature response: methane (or ozone or soot) action has a fast response, whereas CO2 has not. For the long term, what matter is not only whether CO2 emissions were reduced, but also when this reduction started (cf. the red and orange lines, or the black and green lines). For shortlived species such as methane, the timing of their emission reduction hardly matters for the long term (cf. the orange and blue lines). The importance of CO2 for the long term would be even clearer if business as usual type scenarios were used; looking at the temperature scale these ones seem very optimistic.

Short term versus long term
As can be seen on this cartoon graph:

Reducing shortlived warming agents (with a limited atmospheric lifetime) doesn’t reduce the slope (i.e. the long term rate of warming) very much, but rather shifts the line of temperature vs time downwards (or effectively to the right) by a little. Its benefit is constant in time.

Reducing longlived warming agents (predominantly CO2, which accumulates in the atmosphere) reduces the slope (i.e. the long term rate of warming). Its benefit grows over time.

So what’s at issue here is really whether one is more concerned about the short term or the long term effects of climate change (besides the other issues such as air pollution and political practicability). To me, the long term climate effects that we’re at risk of committing ourselves to, are of most concern. That’s a personal judgment of course, based not only on science but also on my values and worldview.

Black carbon is king
Amidst the “other forcings” there are notable differences, e.g. in lifetime, health impacts and ease of mitigation. Black carbon seems to be the prime candidate, as a) it offers strong anciliary health benefits; b) it is often connected with CO2 emissions, so it would also help with the prime long term forcing (though it is also often associated with reflecting (cooling) aerosols, so that’s a caveat to be taken into account); c) it has the shortest lifetime so it has the quickest effect; d) it has a disproportionately large effect on the melting of snow and ice in some of the more vulnerable areas of the world; and e) some of its sources are relatively easy to tackle and/or could be expected to garner more political support (cf. CO2 and CH4).

rapid warming in recent decades has been driven mainly by non-CO2 greenhouse gases, not by the products of fossil fuel burning, CO2 and aerosols, the positive and negative climate forcings of which are partially offsetting.

Note that this is only the case for a limited timeframe, so I see this as a subset of argument #2 above. A result of this is that many CO2 reductions would not lead to a reduction in global avg temperature until after a while. They added a political practicality argument as well:

Such a focus on air pollution has practical benefits that unite the interests of developed and developing countries.

False dilemma
I don’t think it’s fruitful to view this as an either-or discussion. It’s clear that for long term climate stabilization, cumulative CO2 reductions are paramount, and that for the short term reducing other forcings can offer faster results and offer other benefits as well. So the answer to the question “what should we focus on” is “all of the above”. I would applaud more attention to the non-CO2 forcings in the International policy arena. However, let’s not forget that there’s a hefty price and/or climate tag to pay in the end for delaying CO2 emission reductions.

(*): Paul Kelly kickstarted the discussion in a comment at my blog, with a link to Ramanathan’s Op-Ed for the NY Times, from where it was picked up by Keith at CaS. Paul also brought it to Stoat. Ray Pierrehumber at RC chimed in, which drew criticism from Lucia and Keith.