Bob Grumbine has a very interesting pair of articles up, the first supporting his idea that

If by normal we mean what happens most often, then (for 30 year trends) what’s most common is for climate to be changing, not to be some stable reference around which weather bounces. 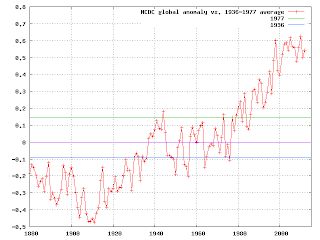 and the second arguing that this perceived normalcy is part of our present problem:

… corresponds to some degree with the polling observation that disbelief in climate change, and disbelief in human involvement in climate change, shows distinct age connection. With age groups over 50 showing much more disbelief than those under. It certainly captures folks like Richard Lindzen, Pat Michaels, and Fred Singer. They did grow up / come of weather age in that climatologically unusual span.