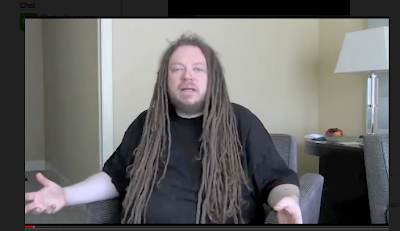 He begins in the same place I do, and Rushkoff does, essentially, that there is no longer a market for labor.

To be sure he only makes passing reference to limits to growth. I think those greatly complicate the situation.

But Lanier’s key point about money is, um, right on the money. Between smothering bureaucracy and cruel neglect, there stands only one possibility: a functional middle class.

And for this to happen, bespoke creative work has to be valued. There is no limit to the amount of art we can produce OR consume. We may be at the beginning of an immensely creative era, but only if we agree to monetize creativity. How to do this requires some careful thought. The idea that we are all in the midst of an endless apprenticeship (while traditional commercial and industrial modalities vanish all around us) doesn’t scale.

But I think we have to let go of growth, or many other things break. So that complicates the job; real things cannot constitute a vanishingly small part of the economy in any way that is stable. Else, you end up with a tulip crisis, of course.

Somehow this all has to be balanced, growth gradually and smoothly ended, fairly soon in the richer countries; somehow all the global constraints have to be fed into the incentive systems too. Nothing resembling government today is competent to do these things. But I don’t see how we manage without burning new constraints into the system.

It’s going to be enormously hard to even get people to understand the spectrum of possibilities.

I call it Morita’s principle; Akio Morita (the Steve Jobs-like visionary behind Sony for many years) frequently said “the customer does not know what is possible.”

But most of our customers, that is, the people who need to buy into some new more inspiring vision, are mostly stuck in their day to day problems and just want strategies to see them through the week, not the century.

We must ask people for a lot of thought and a lot of effort and some sacrifices. We cannot succeed without a positive vision of the future, something that no political party anywhere is offering in any credible way at this time.

(Recycled from Only In It for the Gold)