I was very pleased (and a bit relieved) that Simon Donner accepted my offer to pass the Woody Guthrie Award to a Thinking Blogger to him.

Simon describes himself as “an associate professor in the Department of Geography at the University of British Columbia interested in why the climate matters [who leads] a broad program of research and teaching investigates how climate variability and climate change influences society, as well as ecosystems like coral reefs. This work provides insight into the causes and effects of climate change, public attitudes about climate change, policy options, and what we can all do to adapt.”

Simon and I have only met a couple of times, and while we got along nicely, we have very different intellectual styles. I like to speak first and backpedal later, and am happiest when perceived as a bit iconoclastic and dangerous. Simon on the other hand is careful, thoughtful, and spot on pretty much every time, without ever being the least bit dull. Just what you want, really, in an academic or an outreach professional.

He’s explicitly enumerated the themes of his blogging:

2. In general, we have a very poor understanding the effect of climate variability, climate events or “shocks”, and climate change on our lives. In the western world, this comes in part from being largely isolated from the everyday reality of weather and climate. It is also comes from wrongly placing different types of climate change impacts (precipitation, sea level rise) and climate change impacts of different regions (droughts in the prairies, droughts in sub-saharan Africa) into separate mental boxes. In an interconnected, globalized world, the rain doesn’t have to stop falling in your neighbourhood for you to be affected.

3. Adapting to climate change is far more difficult and far more expensive than most people and most supposed experts assume. This comes from spending too much time and effort estimating the costs of mitigation here in the developed world, and too little looking the efficacy of local development and especially international development projects.

And these are all great topics, and he addresses them well. What he doesn’t explicitly list though, and what draws me to him, is his intercultural empathy. Now it’s true, everyone I know or know of who’s spent time in the South Pacific (possibly excepting Willis Eschenbach, who oddly turns out to have a mutual acquaintance with me), from Simon all the way back to Paul Gauguin, seems very much affected by the culture. But Simon has been known to write about it eloquently in the context of our climate quandary.

Further, he also writes and thinks about the climate communication problem back on our North American shores. This excerpt gives an idea of the carefulness and decency behind his approach:

To be scientific about outreach, you need to be be extremely harsh with yourself about why you are getting engaged beyond the scientific world. I cannot stress this enough, I did not think about this nearly enough before starting this blog.

What values are motivating your engagement, and how are those values affecting the public statements you plan to make? It is perfectly acceptable to advocate. We are citizens, we have every right to express our views. However, if we are not clear with people about when you are making a scientific or “objective” judgement (i.e. our analysis shows climate change will lead to an increase in coral bleaching) versus a value judgement or a “should” statement (i.e. we “should” reduce greenhouse gas emissions), then we are only doing harm to the overall scientific enterprise.

The article that made me think of Simon for the Woody Guthrie Award was this one:

Can we make the climate a part of the human world?

Its conclusion is a peculiar amalgam of optimism and pessimism for those of us mired in the debate, as realism usually is:

Climate scientists, for whom any inherent doubts about the possible extent of human influence on the climate were overcome by years of training in physics and chemistry of the climate system, need to accept that there are rational cultural, religious and historical reasons that the public may fail to believe that anthropogenic climate change is real, let alone that it warrants a policy response. It is unreasonable to expect a lay audience, not armed with the same analytical tools as scientists, to develop lasting acceptance during a one hour public seminar of a scientific conclusion that runs counters to thousands of years of human belief.

When James Annan honored me with the award, he, like most of the past several years of recipients, was focused on the Thinking Blogger part, and I’ve certainly tried to live up to that expectation, both before and after being officially designated a Thinking Blogger. What’s more, he was following in the footsteps of his predecessor, the charming and insightful John Nielsen-Gammon, who suggested that the award go to earth Science bloggers who think critically and hope for a better world through better education and an honest media.

But as someone who actually has a world view on which Woody Guthrie has a large impact, I was faced with a second constraint, that of rewarding the original and obscure intent of the award, which obviously had something to do with, well, Woody Guthrie.

And like anyone else there is only a smallish number of bloggers that I catually follow regularly. I can’t keep up with my RSS feeds, and I get plenty of leads on things to read from social media. The quest for somebody who would both meet John’s criterion and do justice to Woody Guthrie’s memory presented me with a quandary that I described in a recent article here. Really, I wanted someone with a folk ethic, someone who could speak for the human spirit of a time and place. It’s really damned difficult to come up with a scientist who’s in touch with folk wisdom and writes and communicates about it in a spirit of respect and empathy.

Simon may well be flattered that I think of him in both groups. But now he is saddled with finding someone else who fits the bill over the next year.

Good luck, Simon, and thanks for all you do.

As for the rest of you, I would greatly recommend that if you aren’t already doing so, you might want to start paying attention to the underestimated and brilliant Simon Donner. As a reward, you’ll see paragraphs the likes of which the computational nerd never gets to write, like:

After a rough night on the open passage from Butaritari, where the winds have 1000s of kms to stir up a good well, there was much excitement when Tarawa first appeared on the horizon. 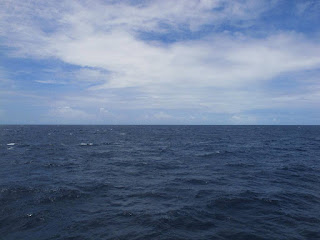 That’s it in the photo. Don’t see anything? The old i-Kiribati mariners, and many fishermen today, navigate between the thin, flat atolls by looking at the clouds. The shallow lagoons of the Central Gilberts shimmer an amazing greenish-blue. That green can often be seen reflected in the low clouds. It’s fairly easy after a bit of practice, especially if you have a pair of polarized sunglasses.

The reflection is only one of the many tricks for navigating in this flat part of the planet. The cloud formations themselves are a good key, as are the currents, the birds and possibly also the fish, if you’ve got a line in the water.

Wow. I was probably trying to figure out compiler switches in some new Fortran compiler that day. Maybe Simon just has better material to work with than I do. But anyway, he’s always well worth your attention.

So here, Simon, is the somewhat hideous homemade graphic scratched together in the depths of internet time by who knows who, that goes with the award. (For those who don’t recognize it, it’s a photo of Woody Guthrie’s guitar.) Paste it and enjoy such glory as it brings.

Thanks for taking the torch, Simon, and may you pass the award on wisely. And if you can, spare a thought for Woody some time in between.